This post is a copy of submission sent to Newcastle City Council in response to public exhibition of Framework strategy for Civic Park and Laman Street. It outlines the esential features of the park and proposes improvements and a new structure Landscape concept to guide future developments.

Parks and Playgrounds Movement have been the principal advocates for the development of a professional landscape for Civic Park Newcastle and its environs since 1968. This included Laman Street and the Civic Precinct. Our 1968 scheme proposed that an overall plan for the precinct be prepared and we are pleased that Council is again considering the adoption of an overall concept for Civic Park and its Civic/Cultural Precinct.

Newcastle Council has been slowly working toward the fulfilment of such a concept ever since Civic Park was extended from the Burwood Rail line to Darby Street under the provisions of the 1952 to 1960 Northumberland County District Planning Scheme. The establishment of the ceremonial axis including the Cultural Centre, the Civic Park Fountain, the Cenotaph and City Hall made this essential. Whilst much has been achieved since 1952/1960 with little funding the progress has been hampered by the lack of a viable professional masterplan capable of being implemented in a positive way.

We note that Newcastle City Council recently resolved to adopt the following key themes listed below at its Ordinary Council Meeting on 5/7/2011 Item No 80 for the future planning of Laman Street and Civic Precinct which includes Civic Park.

The Movement approves of these themes but they need to be given form in a workable master plan. We were very disappointed when the Council in August 2010 did not resolve the design framework for the precinct into a clearly presented plan that could be adopted and implemented before moving to remove the Laman Street trees and create deep controversy in the community. This was an error but we support Council in its current resolve to adopt a redevelopment plan for Laman Street as a new start. 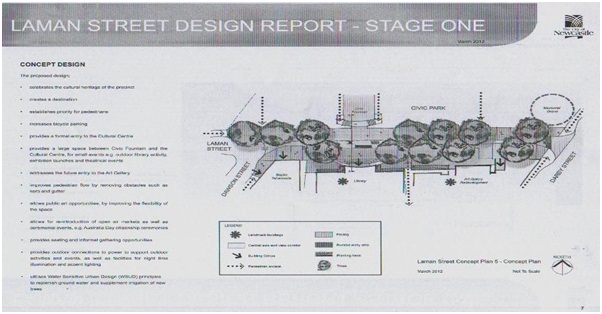 The Laman Street Design- Stage One now before Council is supported by the Parks and Playgrounds Movement. We are pleased that it is proposed to relocate the line of the old water main to the south of the tree planting and the other services to the centre of the existing Laman Street. We would like to see a further two trees planted in the design to replace the 14 trees recently removed. There is space for an extra tree on each side of the street in Council’s design and there will be no shortage of solar access to Laman Street for the next 30 years. Furthermore we believe that future Councils will appropriately maintain the trees in an aesthetic way to achieve views and provide access. Detail of the transition of the new street grades to the entrances of the Art Gallery and the existing Cultural Centre Library are needed as Laman Street slopes down considerably to Darby Street.

We note that Council will retain the central Axis of Civic Park from the City Hall to the Cultural Centre and that it is not proposed to build an under Laman Street Library extension or widen Laman Street into the Park or remove the War Memorial Grove. We are pleased that they will not be in a future plan and we support the proposed exhibition of the ‘Laman Street Design Report -Stage One’ for public comment.
Civic Park is an important civic open space in the heart of Newcastle and Laman Street is an integral part of its landscape. The Park should complement the Laman Street development and respect the work of the Council and of the people of Newcastle that have brought it into existence and also acknowledge and maintain the War Memorial Grove, the Vietnam Memorial, the Cenotaph and the Fountain. Civic Park should also exhibit a soft and pleasant greenness with shade, shelter and floral displays to provide a gracious setting for civic activities and nearby civic buildings.

We favour the strengthened central axis possibly paved and flanked by tree planting much like Hyde Park Sydney and with a dignified approach to the entrance foyer of the Cultural Centre from the park. 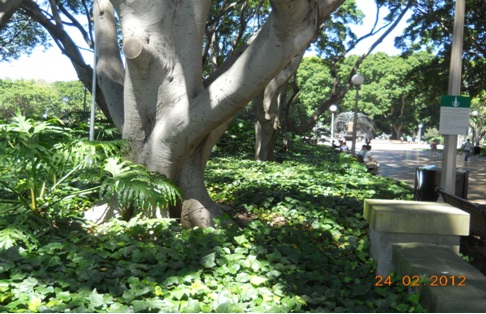 Detail of planting under trees on the main Axis Hyde Park Sydney.
The essential features of Civic Park that should be prominent in the final landscape design  are: The Civic Axis, a Cathedral arch of Laman Street Trees, The Civic Park Fountain, the War Memorial Grove and the central Cenotaph and the Vietnam Memorial area. Other elements including the old Burwood St Railway alignment and the adjacent Signalman’s cottage and Saint Andrews Church that needs to be subtly revealed. Also generously widened stairway entrances are needed directly in front of the Art Gallery and on the Burwood St Railway alignment. The Memorial Grove and the terraced garden beds also need to be revived and replanted to give and an attractive green cascading effect down from Laman Street.


Also a clearly designated disabled access along Laman Street and sweeping around and into the park from Darby Street should be provided.

We favour structure planting within Civic Park with Hills Figs and the ultimate removal of non contributory elements like ugly signs and untidy vans and the garbage area from the park.

We would like to see the toilet block removed from its current location and replaced with a well designed light structure. Also the gardener’s equipment store and shelter could be relocated to the southern boundary at the western end of the Park so that the architecture of the Church and the former Signalman’s Cottage could be visible from the park.

Parks and Playgrounds Movement has included a concept plan below to show the structure planting we favour. It is titled Civic Square Civic Park Newcastle Landscape Structure Plan. 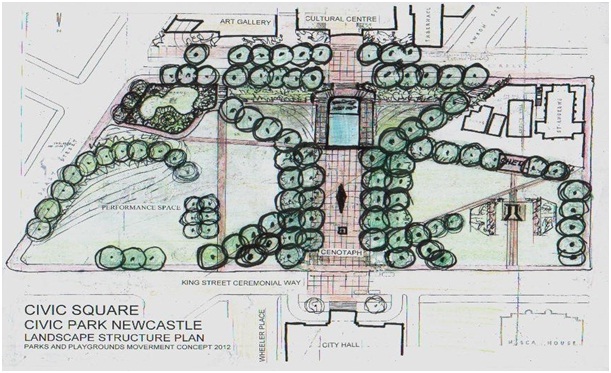 Parks and Playgrounds Movement encourages Council to adopt and implement a Landscape Structure Plan for Civic Park and begin planting where appropriate in the park to complement the new planting proposed in Laman Street. This should be commenced as soon as possible to allow the park to evolve over future years to a mature design.

The Movement would appreciate being able to make further submissions on this matter.

Doug Lithgow for Parks and Playgrounds Movement
The photos and illustrations attached are provided to show detail features of Civic Park. 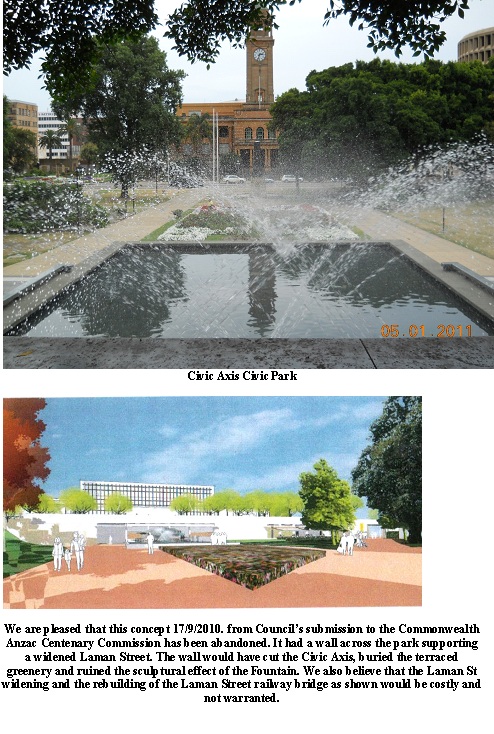 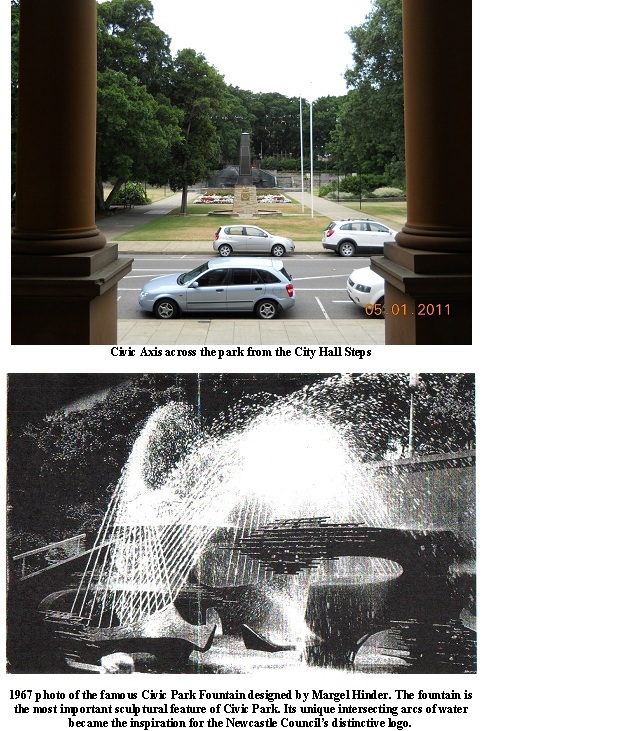 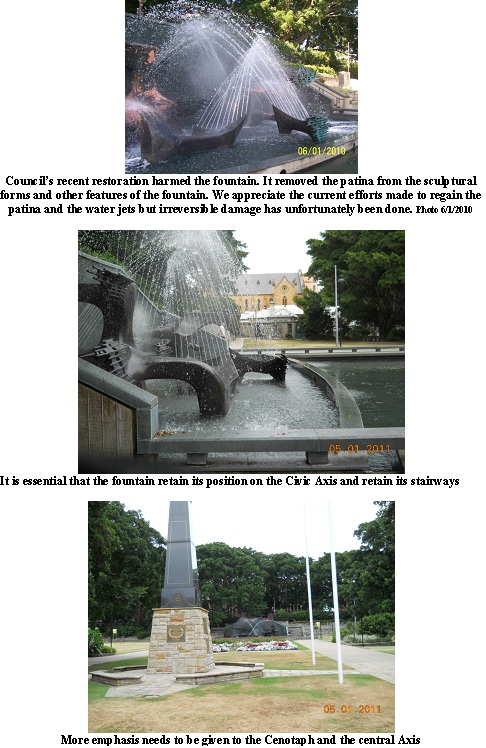 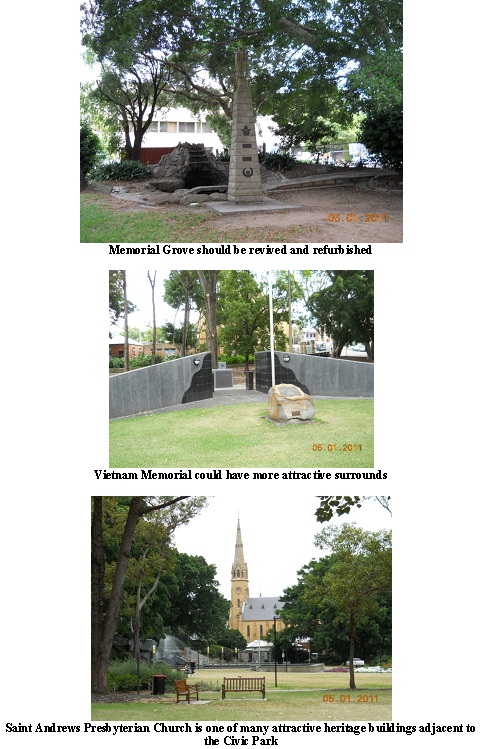 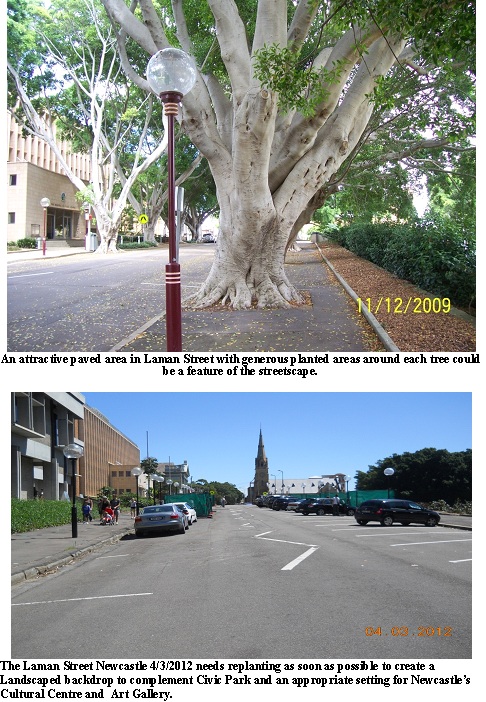