Councillor Bob Cook
Newcastle City Council
16/09/2011
Dear Bob,
Open Letter in the public interest to Councillor Bob Cook
You have placed yourself in the position of chief advocate for the destruction of the Laman Street Landscape and Architect and engineer of a scheme to level Laman Street. It would be much better if you were to honour and respect your elected role as an unbiased Councillor prepared to impartially review the evidence the citizens of Newcastle wish to place before you. You so openly show your bias even to the extent of arguing against independent assessment to protect certain staff and other experts from 'potential reputational damage'.
I note in the press you seem to be considering litigation. The Law is a blunt instrument Bob, as we found out last year. The court would not allow us to place before it, the professional evidence regarding the exaggerated risk reports Council was using. No matters of merit were allowed to be argued. Council won their case by arguing that the S88 of the Roads Act was a stand alone law and the General Manager by using S88 in this instance was not required to consider the provisions of any other Act. She only had to form the opinion that the trees were a Hazard to traffic in Laman St..
The situation is entirely different now and S88 of the Roads Act is an inappropriate instrument to use in designing a landscape future for Civic Park and Laman Street. You can't realistically claim a hazard to traffic now.
The 3 trees cut down after the Pasha Bulker Storm had not been blown over as claimed and the 14 trees currently being considered have not fallen over in the last twelve months.
Too many citizens now know that Council cannot in good faith rely on the earlier unscientific and exaggerated risk claims of the past and must obtain an independent assessment.
I do also wish to remind you that you, no doubt unwittingly, caused  confusion in the first instance by bundling risk assessment with your advocacy of your own development proposal for the levelling of Laman Street and extending it into Civic Park.
With development proposals there is a simple rule that should be followed: Developments require an approved Development Application and Assessment. Council's own Developments of course require an independent assessment. Furthermore if you wish to develop Community Land you are required to ensure that your development complies with the official Plan of Management and if it doesn't you must seek to change the Plan of Management in a lawful way.
The Parks and Playgrounds Movement is a pubic interest body and we would suggest that you take a step back from this issue and allow independent assessment. You are going to have to ultimately submit your Development Proposal if it is brought the Council to public scrutiny and independent assessment.
Yours sincerely
Doug Lithgow President Parks and Playgrounds Movement
No comments: 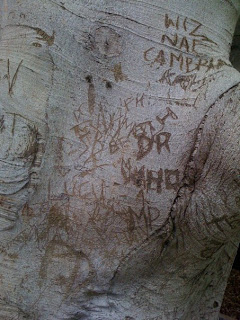 From Doug Lithgow to Newcastle City Councillors and News Editors

You are no doubt aware that Newcastle has hot summer days and that the people of Newcastle appreciate the shade and beauty of the cathedral arch of the Laman Street Trees.

To understand the Laman Street issue

You must first ask yourself:

1. Do you want to develop Laman Street?

2. Do you have an idea of the way you would like it developed?

3. Do you need to remove trees to develop the area in the way you wish?

4. Does the development you propose require the alteration of Council’s Plan of Management: Civic Precinct “Heritage Places Strategic Plan published by Council 1/6/2000?

Were you able to answer ‘yes’ to any of the four questions?

If you were able to answer ‘Yes’ to any of the questions then a Development Application (DA) and an Assessment of your proposal is required by law.

Why is Council able to disregard the law?

Only by pretending that there is no development proposed and by claiming that the trees are a hazard to traffic and have to be summarily removed.

If Council told the people of Newcastle officially about a specific development that was adopted they would have to prepare a Development Application and have a transparent assessment. Council would then not be able to use s.88 of Roads Act to escape lawful Public Exhibition and Assessment.

Public probity demands that an independent assessment of the risk factors is needed to assess the unscientific inflated risk reports relied on by Council. Any development proposed will offcourse require a lawful DA.

All Councillors should be demanding a transparent independent reassessment of the Hazzard or risk?