GPT pulling out of Newcastle gives the city a new opportunity to identify the real issues and think of real people not just property speculation.

People with the future of Newcastle at heart may be interested in this letter P&PM sent to the Minister for the Hunter in July 2009. With GPT pulling out of their proposed Newcastle operation there is another opportunity to look at the real issues and the real people and not just the property speculators.

I think this letter is just as relevant as it was when it was written. It was the P&PM submission to the HDC Report. The HDC is not the sort of body that should produce such a report and it would be a disaster if this is to be their revised Approved Scheme under the Growth Centres Act slipped through as the 1988 Hurst CBD POM was. It sets out our attitude to the Report

Please read and forward on to friends if you think it a fair statement.

The Movement does not share the News Release enthusiasm for the Report on the HDC web site.

The Movement has seen many visions and rejuvenation reports come and go over the past fifty years. Sadly it is at the time of crisis as with the current World Financial Crisis and the December 1989 Newcastle Earthquake that vested interests promote visions and reports with little consideration of the interest of the general public. City planning must serve the general interest of the public and not be based on property speculation and arbitrary individual wants.

To be effective planning must be based on a realistic understanding of needs and the morphology of the City and this is best achieved by sound incremental development that identifies and protects the essential heritage features that give meaning and understanding to the development pattern while recognising the potential and problems of the future.

Minister for the Hunter Jodi McKay said there is no hiding from the issue of rejuvenating the Newcastle City Centre and the NSW Government wants the community to help shape the future of inner-city Newcastle and the Hunter region.

The HDC Report is full of motherhood statements that it then denies in its detail.

The Report is unmistakably biased and prejudiced against passenger rail services which are in reality crucial to the 21st century liveable city.

The report boils down to a plea for more money for the HDC and for the Commonwealth to finance the arbitrary movement of facilities to new locations.

A perfect example of this faulty thinking in action was when the Royal Newcastle Hospital was removed after the 1989 Earthquake from the Newcastle East where it had an excellent location and public access, to New Lambton Heights where it was sited on the Highway 23 road reservation causing intractable problems such as the requirement for a new and more environmentally destructive highway relocation and transport and access problems. The removal of the hospital from Newcastle has been the single most debilitating action in the old town. The HDC and City Council have been hiding from this fact and blame everything else but themselves for their action. No amount of residential redevelopment can return the activity that had evolved in that area around the Hospital over nearly two centuries.

The report makes a plea for money to finance four principal projects:

* relocation and expansion of the University of Newcastle’s campus in the city.
* relocation of the Court house and legal offices to the Civic.
* removal of railway infrastructure from the city and construction of interchange facilities near Wickham.
* redevelopment of Hunter St Mall.

None of these wish list projects really require the removal of the rail infrastructure from the city to be initiated. Indeed all of the projects if really needed would benefit from the retention of passenger rail services.

Ironically it is the Madison Wing at the Hospital site that was the first real university push into the city and that is earmarked for demolition!  Of course the university should be encouraged to consolidate its city campus and student accommodation but that will be much more successful with passenger rail services are retained.

The existing Court House precinct has a logic and distinctive presence that is capable of expansion where it is rather than be relocated at Civic. It would be far more logical to return the  NSW Department of Planning to the civic where it would have a logical presence as it used to have when the Northumberland County Council and the SPA were located at the Civic.

The GPT suburban mall type proposal should never have been facilitated by the LEP for the CBD. It will destroy permanently the historic Dangar Axis which defines the old cathedral town and will overpower the pedestrian scale of the existing Hunter Street Mall area with its ugly elevated carpking structure. This elevated parking structure will also obliterate the historic panorama from the Cathedral. The existing Market Street –Queens Wharf –Cathedral (Dangar Axis) link should be emphasised by any new development in the Mall area. Newcastle Council had an excellent proposal recently before it that satisfied this important criterion.

The removal of passenger rail services from Newcastle as proposed would wipe out the opportunity of Newcastle to show off its unique sense of place and prevent the Newcastle Lake Macquarie and Maitland urban area from having a transit orientated future.

The following check list is provided to help understand what is happening to Newcastle.

Living City – since HDC the city has declined, principally because of the1988 CBD Business Plan which was meant to revitalise the city has unfortunately become a blue print for its demise.

The $100 million dollars Building Better Cities funding which should have been used to create a public domain foreshore park extending the Joy Cummings 1981 Harbour Foreshore Scheme through to Throsby Creek was not well used. The public domain foreshore parkland is still needed as the centrepiece of the Central Honeysuckle development. The Honeysuckle Approved Scheme Masterplan proposed a rail overbridge crossing at Wickham which should have been built at the same time as the Carrington Bridge with ‘Building Better Cities’ money. 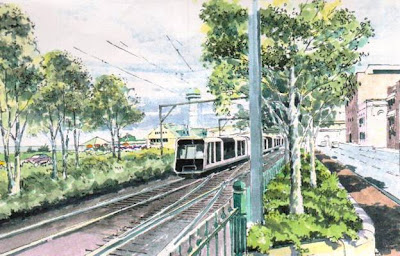 Economic Diversity - should be encouraged by developing the natural and heritage advantages of the City Centre. The positive promotion of the city has never been attempted and it is always stories of woe. We have a magnificent theatre in the Victoria Theatre but it is empty and we never have promoted and developed the positive advantages of the Old Town.

Revitalise retail – It is not practical or in the public interest to try to make the Cathedral town of Newcastle a Charlestown like suburban shopping mall. It needs to retain its traditional character and be a speciality market orientated place something like the university Cathedral town of Durham in England or like the Rocks in Sydney.

Commercial Investment- since HDC and the city centre Committee, the inner city has fallen prey to property speculation rather than to sound commercial development. This HDC Report unfortunately is heavily skewed in favour of property speculation rather than practical public interest planning for a future city that will feature Transit Orientated Development.

Public Transport – the report as shown above struggles to thwart the creation of a public transit orientated city by being prejudiced against our existing passenger rail infrastructure. Passenger rail services have been an essential and distinctive feature of the city of Newcastle for over 150 years. Yes the services should be improved and modernised and trains should not be stabled in the open foreshore corridor. Improvements should be made to Newcastle Station. The grand entrance reopened and an arrival and departure concourse developed.

Criticism of 8 car rail sets with only a few passengers have been made but Newcastle is currently the end of the CityRail electric service and 8 car sets will only be full when special events are planned in the city on the foreshore. There is no reason why sets could not be more often split into 4 car sets at Gosford for services on to Newcastle. Special daily excursions should be organised from Sydney and the Central Coast to visit Heritage sites, the Convict Mines, Macquarie Pier and Nobbys, Fort Scratchley and Christ Church Cathedral. These things are merely operational details that can be altered to fit circumstances. Newcastle never promotes its natural and historical advantages. We hope that the current passenger bus fleet will be replaced by lighter electric powered vehicles in the new city of the future.. If there is an interchange to be constructed on the City Rail network in the northern area it should be as planned at Glendale in the Lake Macquarie Local Government area where it is more central and supported by all the local Councils. 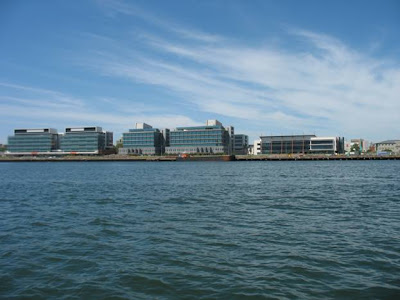 Revitalising the Hunter Street Mall, Celebrating the special character of Newcastle and improving the quality of the public landscape and obtaining a better standard of architecture in new buildings are matters we all strive for but they will not be achieved until we truly identify the problems and potential of the existing city and promote the city in a positive and practical way.

Doug Lithgow  Freeman of the City of Newcastle
Parks and Playgrounds Movement
No comments: 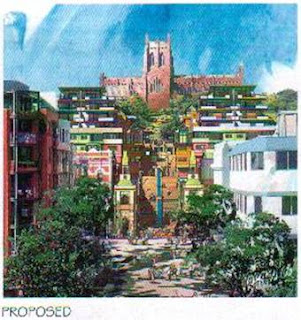 The GPT Group (GPT) announced it will withdraw from its proposed $600 million Newcastle development.

I realise that GPT is starting to open part of the new shopping centre at Charlestown this week but It could be thought that their strategy may have been to hold Newcastle until Charlestown was ready to be on line and not allow it to be in competition.

I can recall when the earthquake hit Newcastle in Dec 1989 the new Charlestown Square was being opened and the inner Newcastle was actually closed off with road blocks and a police cordon  put in place.(This was a silly idea not of their making but was to their advantage)  This gave Charlestown’s new Square a free start without competition. They have been able to steal a march on Newcastle this time with this latest body blow.

However it was always doubtful if their huge elevated car park slap bang in front of Newcastle’s Cathedral and the proposed internal shopping Mall replacing the open Hunter Street Mall would ever be a viable proposition with or without passenger rail connection.

GPT has actually had a strangle hold over the old historic City for too long and the City should now move to encourage a more sympathetic development as was proposed with the excellent Dangar axis stairway shopping and apartment project.
No comments: