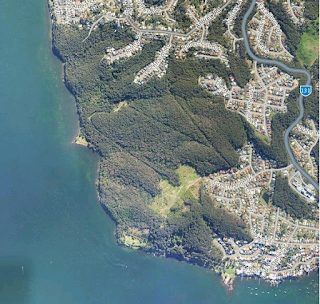 Unstable planning processes, company fraud, and lack of transparency and public accountability hampered the establishment of Green Point Foreshore Reserve at Lake Macquarie, NSW. The 40 year campaign for the Green Point Foreshore Reserve provides an important case study of the difficulties with old mining companies and the destructive unlawful activities of interlopers.

Green Point Foreshore Reserve was proposed officially by resolution of the Northumberland County Council (The Regional Planning Authority) as a ‘County National Park’ in 1956. However its establishment was hampered by an unstable planning process and corporate irregularities that have never been publicly investigated or made transparent. A legal review is needed to examine the ‘reactivation’ of the Cardiff Coal Company and its activities after 1972 and a reform to Corporation Law and Planning law to improve transparency and responsibility.

Parks and Playgrounds Movement have had a continuing interest in the Cardiff Coal Company land since 1952. The Coal Company’s property (Portion 35A and 36A) formed a large part of the land proposed for a ‘County National Park’ between Cardiff Point and Green Point on the shores of Lake Macquarie. (FIG. I) FIG. I (ABOVE): Locality Sketch Map of the proposed ‘County National Park‘prepared by the Northumberland County Council 1963. The area leased by the Belmont Colliery for surface working (DML 70) is shown affecting Por. 35A with access from Jean St. Belmont. The areas resumed  for Croudace Rd (2/2/1934) and for the HDWB Water Tower (17/9/1948) at Crown Street are charted on the sketch map Portion 35A.

The Parks and Playgrounds Movement was the chief community advocate for the Park and following the Planning Inquiry held in 1957 by the Minister for Local Government we expected the park to be notified in the next planning cycle after the underground coal mining had been completed. The Northumberland County Council’s plan (FIG.I) and letter (FIG.II) are evidence of their continuing investigation of the proposal. 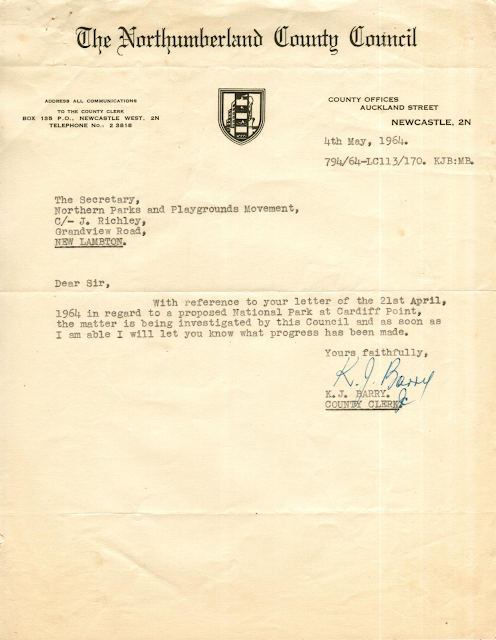 FIG. II (ABOVE); Letter from Mr. Barry County Clerk Northumberland County Council to Mr Richley dealing with the progress of the proposed National Park at Cardiff Point. ( see (FIG. I).  The County Council was disbanded in 1964 and the State Planning Authority continued with the National Park Proposal.

The Cardiff Coal Company was one of the first Australian owned mining companies and was incorporated by a private Act of the NSW Parliament in 1863 under a Deed of Settlement. The incorporation predates the first NSW Companies Act of 1874. After much early activity the Coal Company had been inactive for most of its life. There were no valid meetings of directors after about 1910 and most of the original shareholders and directors had died and the Company could not be found. Even in December 2002 when the Lunn family took action to wind up the company, Justice Barrett J. in his Judgment, Lunn V Cardiff Coal (5095/02) could not order the winding up of the company because the company was incorporated by Act of Parliament and was not a Part 5.7 body under Sec.583 of the Commonwealth Corporations Act 2001. A Liquidator was only able to be appointed by the lawyers arguing that the action had commenced a decade earlier. The company is not wound up at this date (11/12/2012)  20 years after the sale of the Cardiff Coal Coy land assets by interlopers to a development Company on .

The principal asset of the Cardiff Coal Company was the foreshore land at that was held in Torrens Title and underlain by valuable coal seams. The Lake Macquarie Shire Council was unable to locate the Cardiff Coal Company in 1934 when it needed to acquire part of its land for the construction of Croudace Bay Road and the Hunter District Water Board was also unable to find the company in 1948 to build a water tower and it had to resume land for the water tower off Crown Street. The areas affected by resumptions are shown in (FIG. I).  The Movement’s President Mr Joe Richley had been in regular contact with the Belmont Colliery management who had the surface facilities on Portion 35A in the 60’s.  The Colliery was operating on part of the Cardiff Coal Company land but it had no title to the land other than the Mineral lease. There were also people living on the land in old miner’s cottages without title near Black Jacks Pt. Interestingly a hand written note from Belmont Colliery’s solicitor Mr. Macphail explaining that the Company had no tenure to the land disappeared from the 1948 Water Board file when I requested it under Freedom Of Information. I had been previously told by the Water Board’s property manager of the note. Nonetheless the Water Board files and the registered Land title documentation still show clearly that Belmont Colliery Pty Ltd never held registered title to the land. (Government. Gazette. ).

The Belmont Colliery Pty Ltd was incorporated in 1937 and had made written representations to the Local Member of Parliament  Mr George Booth MP in an effort to obtain tenure to the Cardiff Coal Coy Lands. Mr Booth took up the matter with the Hon John Baddley MP who was Deputy Premier and Minister for Mines at that time. A Mining Lease was subsequently issued to the Belmont Colliery Company Pty Ltd. (Department of Mines NSW Minutes 20/8/1947 Miscellaneous Papers Ms 478715).   It was explained that the Land Title however remained with the Cardiff Coal Company 1863.

Minutes of the Belmont Yacht Club between 1971 and 1972 show that members of the Yacht Club were also interested in the Cardiff Coal Coy land at Black Jacks Point and that Mr Savage, a member of the club, arranged a lease in 1973 for the Yacht Club to operate a slipway. Mr Savage purchased the Belmont Colliery Pty Ltd shares in December 1972 and leased the slipway to the Club even though he had no title to the land.

After obtaining the company records Mr Savage and certain persons reactivated the Coal Company and appointed Mr Savage as Chairman. How this could lawfully be done without a meeting of all share holders has never been explained or investigated. A Judicial review or ICAC inquiry could have perhaps examine the ‘reactivation’ of the Cardiff Coal Company and its activities after 1973 with the view to identifying whether therehad been breaches of the law or the Company’s Charter. An Inquiry could have also determined why corporate and administrative laws were ineffective in this instance and possibly recommend amendments to Corporations Act and improvements to transparency and responsibility in Local Government and Planning.

Wigram Allen was the chairman of the Cardiff Coal company until his death in 1941 and he had made many references to the Cardiff Coal Company in his diaries which are held in the Mitchell Library. These diaries were produced in the Lunn V Savage case in the Supreme Court of NSW, Equity Division No. 3047/87.

The Cardiff Coal Company’s land at Cardiff Point was valued in the order of 6 million dollars in 1990 and the company had obtained royalties from the coal mined under its lands and from deposits of gravel, which were extensively and increasingly quarried by interlopers. Consent from the Lake Macquarie Shire Council for the quarrying at Cardiff point and off Croudace Rd could not be found and there had been no environmental assessment or restoration of the quarries planned. The profits from quarrying and the land sale  were consigned to Carrington Holdings Pty Ltd a company under the control of persons who appear to have been the interlopers.

We believe that two days after the Cardiff Coal Company had been reactivated in about 1977; solicitors lodged an application for new title deeds for the Coal Company land on behalf of Mr LH Savage who had signed a statutory declaration as the director under the Seal of the Cardiff Company dated  24th of February 1977 (FIG. III). 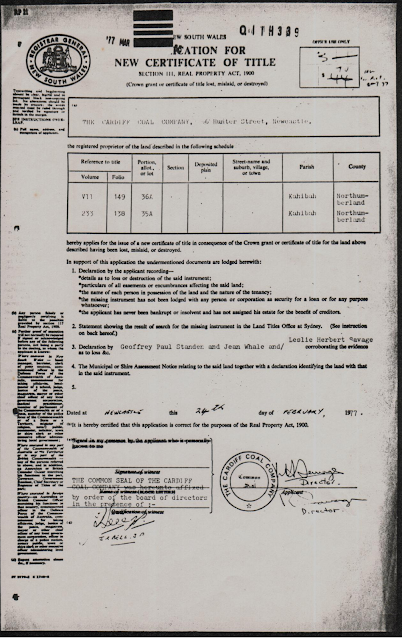 FIG. III (ABOVE): Copy of Application for New Certificate of Title for Portions 36A and 35A Parish of Kahibah from the NSW Land Titles Office signed under the seal of the Cardiff Coal Company by LH Savage and R Savage Directors

He explained that the title deeds had been lost and New Title Deeds were issued by the NSW Land Titles Office but the minutes dealing with the issue were destroyed. Two long standing Caveats on the Cardiff Coal Coy Title Deeds were also removed upon a request by “Mr Savage, Director and Mr McGregor, Secretary “under the Company Seal and with Statutory Declarations from PJ Anicich solicitor and LH Savage: Registered.15/10/81 (FIG. IV). 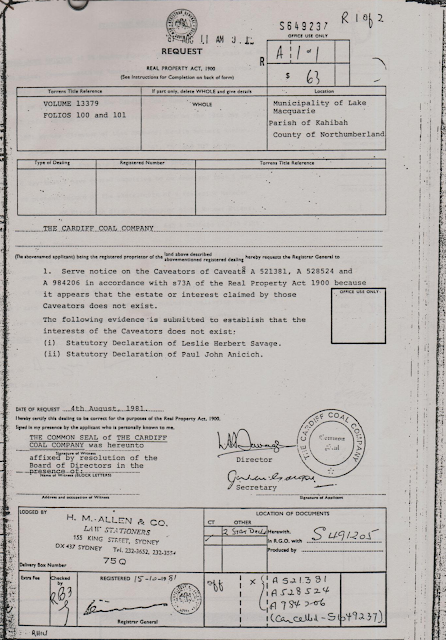 FIG. IV (ABOVE): Request that notice be served on the Caveators lodged with the NSW Registrar General signed under the seal of the Cardiff Coal Company with Statutory Declarations attached of Leslie Herbert Savage and Paul John Anicich (not shown here).

Parks and Playgrounds Movement had no knowledge of the reactivation of the old Cardiff Coal Company or of the activities of interlopers. We were completely surprised when on  Mr Savage was reported in the Newcastle Morning (FIG. V) as the owner of the land and that an application for rezoning to allow for a $100 Million Dollar residential and tourist development had been made. (This proposal included the two Cardiff Coal Company Portions 35A and 36A). 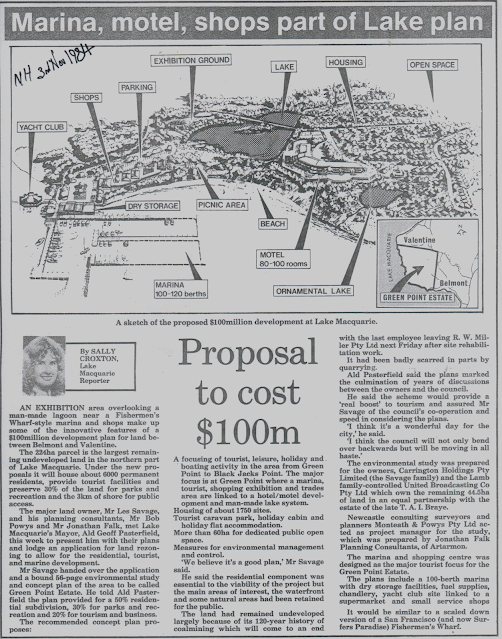 FIG. V (ABOVE): article outlining proposal for rezoning of the area earmarked for a  by the Northumberland County Council and the Lake Macquarie Shire Council.

Because of the long standing park proposal for the land, the Parks and Playgrounds Movement successfully lobbied the Council and State Planning Authorities to defer the rezoning and prepare a Local Environmental Study for the area under the provisions of the Environmental Planning Act 1979.

There was a massive public outcry led by the Green Point Action Committee that we had  formed in October 1988 to work for the park. Various alternative proposals were made but on Mr Savage sold the Cardiff Coal Company land to McCloys Pty Ltd a property developer who then had carriage of the rezoning application. This was despite the litigation that had been commenced by the Lunn family based on a prima facie case of forgery. (FIG. VI) 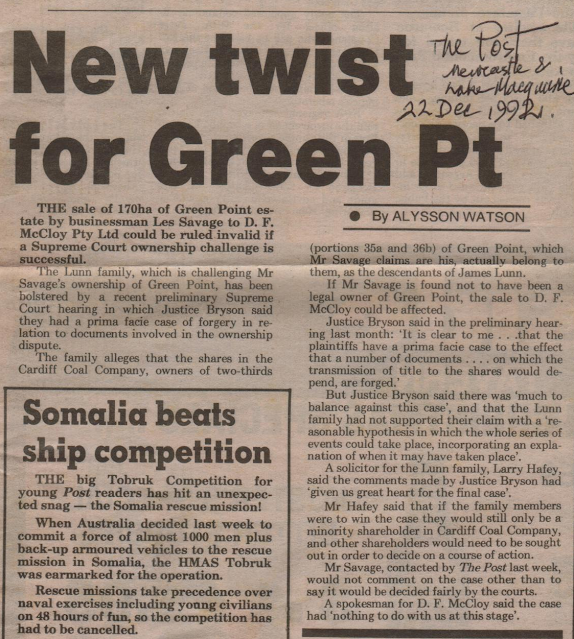 (A bogus 1916 Deed of Settlement for the Company was typed using a typeface not in use until 1930 (Tytell expert evidence ) and bogus share transfers were made at that time with stamp duty paid in dollars and cents that did not come into use in Australia until 1966 and a number of other signatures were also forged). This evidence only came to light in the Lunn V Savage litigation.

There was mounting public concern in the community after the sale of the land and the Lake Macquarie Council ultimately resolved to acquire 154 ha for the creation of the Green Point Foreshore Reserve and to rezone 66 ha for urban development in accord with a Deed of Agreement between McCloys Pty Ltd and the Lake Macquarie City Council dated 19/7/94.

All of the urban-zoned Cardiff Coal Company land has now been developed and the Green Point Reserve established (FIG. ) but persons responsible for the alleged share fraud and the reactivation of the Cardiff Coal Company have never been identified. Also the dispersal of the Company’s assets has not been properly explained. The Lunn family who began the litigation in the Supreme Court in 1989 have not been compensated despite being successful in their principal Court Case and the many appeals made by the defendants up to an application to appeal to the High Court of Australia were rejected. 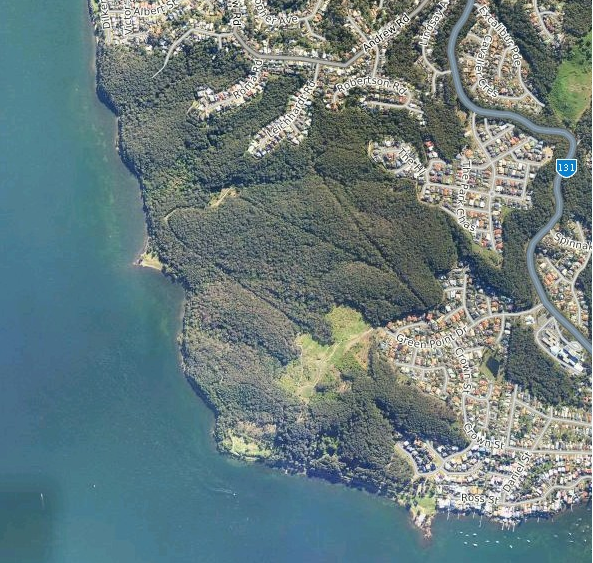 FIG. VII (ABOVE): Aerial view of the Green Point Foreshore Reserve 2012 with completed residential subdivision surrounding and intruding into the original area officially proposed in 1956 which was shown in (FIG. I )

An inquiry should still examine the ‘reactivation’ of the Cardiff Coal Company and its activities after 1972 and recommend reform to Corporation and Planning law to improve transparency and responsibility.

Significant dates leading to and including the Lunn V Savage, case in the Supreme Court NSW- Equity Division - 3047/89 are listed below.