The State must intervene at Civic Newcastle because of the Council's wrong conduct in inappropriately using Sec.88 of the Roads Act to clear Laman Street for widening into Civic Park to progress an unortherised development.

Every park in Newcastle is governed by a Plan of Management (PoM) indeed every public park in NSW has a PoM. This is a statutory requirement under the Local Government Act 1993. Crown Reserves in Newcastle like King Edward Headland Reserve have a PoM under the requirements of the Crown Lands Act.

Newcastle Council is morally and legally bound to respect the official plans of management and only approve complying developments. If a Council wishes to carry out other developments they must lawfully amend the PoM.

This machinery is there to bring a transparent and open approach to the management of public lands and parks and to give citizens a chance to make formal input with an independent public hearing.

The PoM for the Civic Cultural Precinct identified the Fig Trees in Laman street as a principal landscape feature and to be only subjected to minor pruning to maintain the vista.

By invoking the Roads Act to circumvent the provisions of the PoM and remove these significant trees is wrong conduct as there are no road works being done and there is no credible traffic hazard.

Newcastle Council should be caring for the trees and carrying out minor pruning as required by the Plan of Management.

Newcastle needs help to provide an independent risk assessment of the trees because the Council's risk reports are extravagantly exaggerated to justify a basis for invoking the Roads Act S88.

The people of Newcastle are outraged and need honest help.

Doug Lithgow Freeman of the City of Newcastle
President Parks and Playgrounds Movement Inc.
No comments:

The Design Framework for the Civic Precinct included many proposals including those illustrated below. They were bundled into a confusing item in the Council Resolution of the 17th ‘of August 2010 that caused the current problems at Laman Street Trees.

Now a year later, after more than $200,000 Dollars have been wasted and the Community’s trust and confidence in the Council shattered it Council hasn’t resolved what it is trying to do.

Laman Street is part of the approved plan of management for all the council owned land in the Civic Precinct. This land includes Civic Park, Laman Street, Christie Place and Church Walk Park. The management Plan controlling the area was adopted by Council in 2000 and is still the official plan. The Laman Street Trees are charted on the official PoM.

There is a lawful process for amending the Plan.  It requires the public exhibition of the amended plan and the invitation of public comment and transparent resolution of the plan.

Newcastle has never formally included its framework ideas into the official POM for the Precinct. Ideas including a Library under Laman Street have been touted.  (See below) 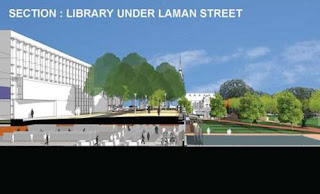 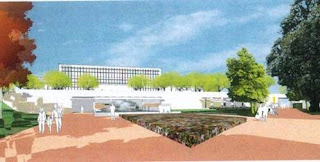 COUNCIL MUST DECIDE WHAT IT IS DOING AND GIVE THE PEOPLE A CHANCE TO MAKE COMMENT BEFORE FURTHER DESTRUCTION OF THE LAMAN STREET.
No comments: