TO ALL WHO HAVE AN INTEREST IN THE PUBLIC DOMAIN?

A statement from Doug Lithgow President of the Parks and Playgrounds Movement.

In the early hours of the morning (Tues 31 Jan 2012) a large contingent of NSW Police were unleashed on the embattled citizens of Newcastle and their most significant landscape feature in the cultural heart of the city. (14 healthy innocent fig trees that have been quietly providing the Cultural Precinct in Laman Street with shade shelter and beauty for 50 years)

Newcastle people who love their city and appreciate the fine cathedral arch of trees in front of their Cultural Centre are perplexed that their new General; Manager and local Member of Parliament have called in a small army of police to subjugate the locals and ensure that they were not going to be given a lawful and formal chance to have say in the planning of their cultural precinct.

We had hoped that the Premier of NSW and the Minister for Local Government would have intervened long ago to bring good governance to the Council of the City of Newcastle rather than take it out on our notable trees and their noble defenders today.

Sadly for our City there are no minds being ennobled in this pointless and unnecessary exercise of brute force.

The Parks and Playgrounds Movement had asked the Newcastle Council to decide on a plan for the Cultural precinct as long ago as Aug/Sept 2010 and place their plan on public exhibition to allow public scrutiny. At this date Feb. 2012 the Council still hasn’t formally decided on a plan or placed it on exhibition for public examination. The people of NSW have a perfect right to have a say when a community land plan of management is affected but not in Newcastle!

Please find the letter to the General Manager as images below. Sent to the Lord Mayor and Councillors. You will see I have also attached the 1968 letter as evidence of our longstanding efforts.
This letter follows on from matters placed before the Premier and Directorate of Local Government. RE Previous letter copy below.

Cheers and hope you all are well
Yours sincerely
Doug Lithgow

This is a very serious matter requiring your attention. A bizarre situation has developed in Newcastle due to Newcastle Council’s public half-truths about the Newcastle Civic Precinct future development. This situation has been exacerbated by Council’s misinformation, inappropriate procedure and Councillor Intransigence. A breakdown of public confidence in the elected Council has occurred and requires appropriate investigation by the NSW Division of Local Government and possible intervention to correct the situation.

Newcastle citizens wonder why Newcastle Council has persisted in bullying their way into the Laman Street Fig fiasco. Council’s behaviour has caused heartache and inconvenience to the lives of those who care about the city and its amenity. There is also the unreasonable cost, inconvenience and waste that Councillors have unreasonably foisted on to the city ratepayers. As you know the Parks and Playgrounds Movement has given more than fifty years of service in the public interest to the Hunter Region, especially to the City of Newcastle and we are distressed by this bizarre situation that has been allowed to persist.

This unsatisfactory situation cannot be resolved if this important cultural precinct is to be stripped of its attractive mature trees without the a proper review of the exaggerated risk assessment that certain Councillors rely on to form an opinion that the trees need to be felled for the purpose of  removing a traffic hazard.

By apparently not wanting to amend the official Civic Precinct Plan of Management (POM) in a transparent way and by their clandestine development proposal the Newcastle City Councillors have created a fig fiasco. All Public Parks are required to have Plans of Management and Council is required to implement them. The 1993 Local Government Act introduced Plans of Management in an effort to provide better management of parks and public lands in NSW and to allow the community to have a say. In the year 2000 Council adopted an official Civic Precinct plan which included Council owned land at Civic Park, Laman Street, Christie Place and Church Walk Park.  Council may amend the plan but certain rules are expected to be followed for public exhibition, public submissions and a public hearing.

Council’s proposals that required the removal of 14 fig tress from Laman Street should have triggered the Plan of Management provisions of the Local Government Act and been lawfully exhibited to the citizens of Newcastle for their consideration.

The situation as it developed.

The exhibition of Council’s plans was not going to happen in the Civic Precinct because Council, as we now know, was secretly developing proposals for an under Laman Street building and major engineering works to level and extend Laman Street into Civic Park to create a wide mezzanine plaza that was to be called ‘Anzac Centennial Place’. The proposal was predicated on the removal of 14 trees in Laman Street and the obliteration of the existing Memorial Grove and changes to Civic Park Fountain. The proposal should have been exhibited as an amendment to the Civic Plan of Management but was not. Nor was it honestly introduced to Council’s two day workshop in May last year that was supposed to be considering the future of the Civic Precinct. The time and energy of the seventy participants that had given up their weekend in good faith to consider the issues was misused and wasted. Unfortunately there are other recent examples of the disregard of transparency in parkland planning at Nobbys, Merewether and King Edward Headland Reserve with Newcastle City Council and it may have become a systemic problem.

Name/Organisation: City of Newcastle
Submission Summary: The creation of a new public space called Anzac Centennial Place at Laman Street, in the cultural and commemorative heart of Newcastle. The project consolidates and reinforces the commemorative efforts of a previous generation, thereby giving continuity to the community's acts of remembrance.
Date received: 17/09/2010)

Council did not resolve and Exhibit their proposals & we had to commence Legal action.

Parks and Playgrounds Movement Inc. made an application to the Land and Environment Court in the public interest for an injunction to restrain the Council from their precipitous intention to remove the trees without first resolving and exhibiting their Plan of Management for the precinct.

We obtained the injunction but were unsuccessful on the wider issue because we were prevented from considering matters of merit. Furthermore Council did not disclose to the court evidence of their Centennial Place development proposal. Newcastle Council had not made this proposal public even though they had registered it with the Commonwealth Centenary Commission prior to the court hearing.

Paragraph 78 goes on to maintain that it is the tree removal that has necessitated further works in the future.

The future works proposed but not made open and clear in public arena were for the building of an under-Laman Street Library building and the extension of Laman Street into Civic Park to create a wide plaza.  Normal Council transparency would require that such proposals affecting public land need to be exhibited to the public for consideration as provided for in the Local Government Act.

Far from being transparent, Council has insisted that these fourteen trees are a traffic hazard and must be removed as a matter of public safety.

The Council’s Exaggerated Risk Assessment requires independent review
Why are Councillors reluctant to review the risk analysis for the fig trees when they know their analysis has been fairly challenged as being exaggerated and unscientific? They have been offered help or funding for an independent assessment by the Insurance Coy, a citizen donor and by the Premier of NSW but certain Councillors have frustrated Council by resorting to technicalities of meeting procedure to evade this logical resolution. In this way they have caused a deep rift to develop between the community and council and caused much inconvenience and extraordinary costs by their intransigence.

The Newcastle’s fig fiasco is no doubt the result of a mixture of public misinformation, inappropriate procedure and Councillor Intransigence. We request that the Local Government division of the Premiers Department intervene as a matter of urgency to defuse the confrontation and institute a clear open process for the planning of the Newcastle Civic Precinct. 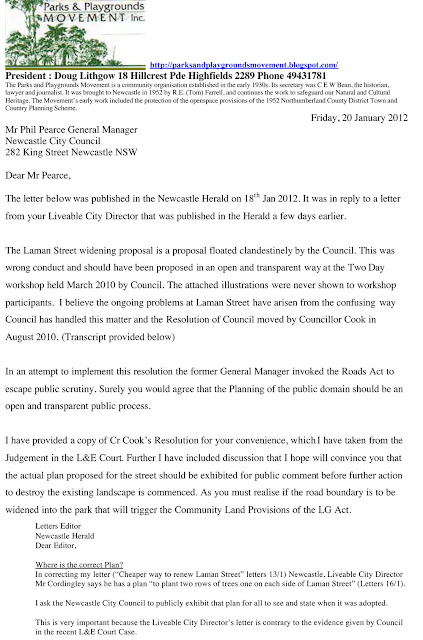 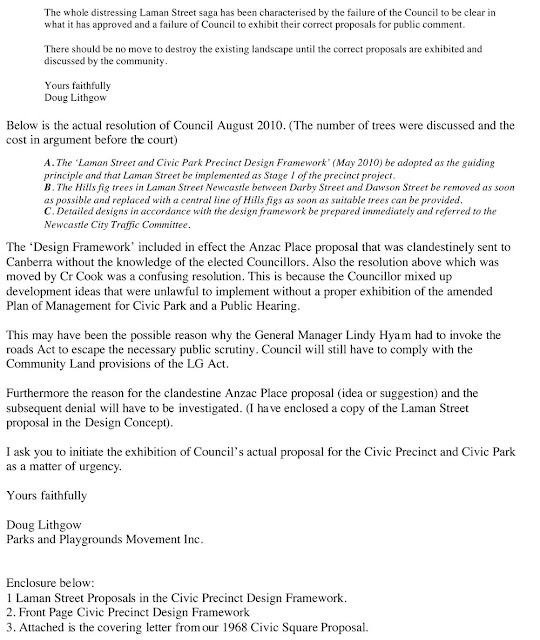 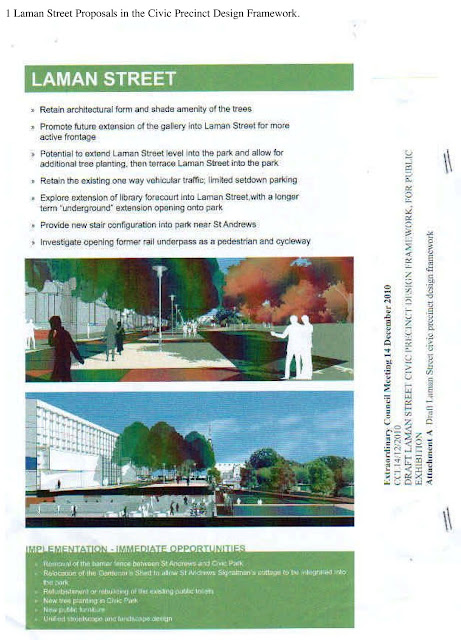 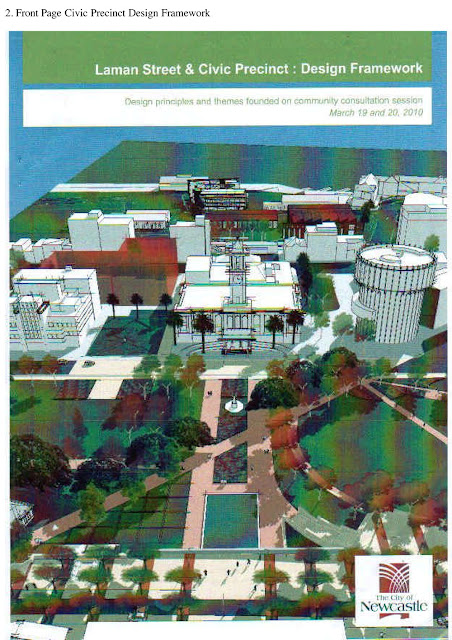 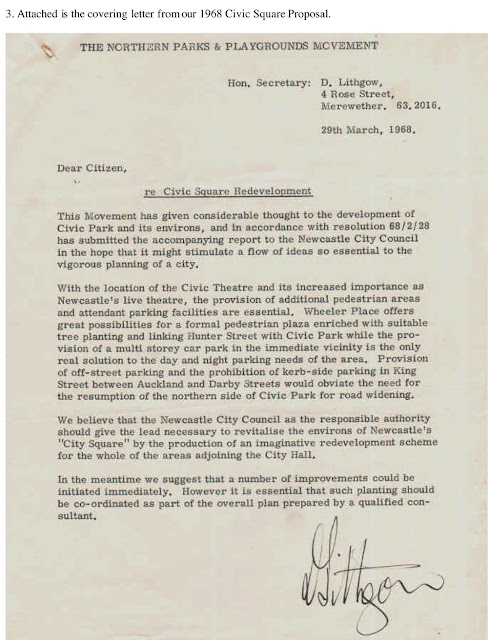 Points of Contention in the Fig Debate

Re the contribution to the Fig Debate from Council’s web site:
http://www.newcastle.nsw.gov.au/about_newcastle/news_and_events/media_releases/media_releases/fig_forum_light_on_facts/_nocache

These issues are in contention from the Council’s point of view and can be answered formally.

The issues will not go away (trees or no trees) and the Council should show “Reasonable Cause” for their resolution to remove the trees under section 88 of the Roads Act 1993. (The question is: 'If a Councillor has' can mean 'If a Councillor thinks he has'. I believe that Council cannot now have a reasonable cause for the opinion that the trees are a hazard to traffic.

In the case Parks and Playgrounds Movement Vs Newcastle Council September 2010 it was presumed that General Manager Lindy Hyam had the opinion that the trees were a hazard to traffic.
However this week’s Forum demolished the basis for such an opinion to be held by the Council. Elected Councillors should show “reasonable cause” for their action in forming the opinion that the trees are a Hazard to traffic.

I have listed the issues in dot points below:

If you wish to understand the proposal for the widened Laman Street Plaza,  Called Anzac Place in Council’s submission to the Commonwealth Commission, it is attached below. The proposal was exhibited euphemistically as a Design Framework and has Council’s Logo on the front page. It claims to be from the two day workshop in March 2010 but was not. 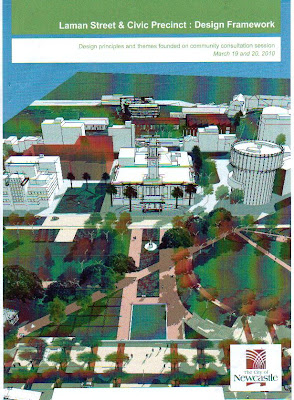 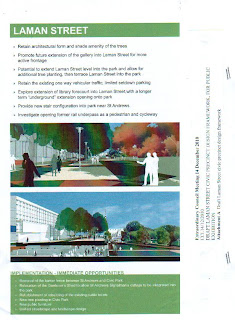 Council states on its web: Last night’s fig fact forum included a number of statements that were false. These are addressed below. (I have paraphrased the 14 points. Full text on Council’s web site)

§         Council is a public body proud of its openness and transparency- it has conducted public forums, voice etc and provided information on Council Website.
§         Offensive to claim Council withheld Radar reports- request processed under Government Information (public access) Act.
§         Council has obtained 4 independent Arborist Assessments.
§         Council’s insurer will not cover risk beyond 31st Jan 2012.
§         Irresponsible statements that trees safe- 35 out of 135 removed failed and removed from the inner city.
§         Anzac Plaza is not reason for removing figs it is an idea sent to Commission –not funds application.
§         No tree reports have anything to do with Anzac Plaza.
§         Not the first time the Roads Act has been used to remove hazards - decision upheld by Court.
§         Behaviour of SOF people has required the Police.
§         A detailed response to Prof Stewart is on the Council Web.
§         SOF refers to arborist reports that contradict Council’s advice- they are not legally accountable Council’s advice based on knowledge of the site.
§         No ulterior motives and Council will replant 4 metre high trees in vaults to prevent root problems.
§         Council acknowledges that Trees have become contentious but acts for whole community.
§         Council desires to concentrate on Core Duties.

Cheers to all,
Doug Lithgow
No comments: