As you are aware the Parks and Playgrounds Movement has been concerned about the damage that was done to the Fountain by the Council at great cost in an ill-conceived effort to restore and maintain the fountain.

We were appalled when the fountain was stripped down and the copper forms annealed in a foolish effort to remove the dints that the forms had suffered since the fountain’s erection by Margel and Frank Hinder.

The Fountain is a work of art and the symbol of the Newcastle City Council used on every item of correspondence sent out by the Council. It is the central cultural embellishment in the Civic Park.

Other wrong things were done and even the surroundings of this unique sculpture of metal form and dynamic water jets were laid waste without careful thought or proper care.

I noticed as I passed the fountain today, Friday 25th June 2010, that the jets were still not operating correctly and that the patina has not yet been restored to the copper forms.

Council should restore the patina immediately and landscape the surroundings. This is something that can be done with minimum technical skill.

Also the ugly signs placed near the fountain could be removed forthwith and the intruding electrical control box painted an earth colour if it cannot be hidden.

I have enclosed a 1967 photo of the fountain showing one of two street Lights and white hand rail that council removed because they detracted from the sculpture. Past Councils did care about the city and its public spaces. It is disappointing that recent Councils have been uncaring and your Council needs to show that it has the City at heart. 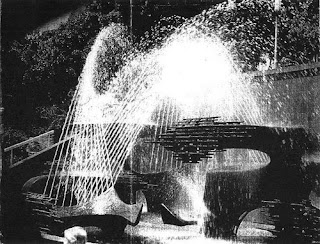 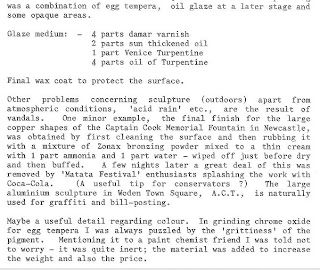 It must be five years since Parks and Playgrounds Movement drew Council’s attention to this sad matter and for the sake of our city we would be pleased if these things could be attended to expeditiously.